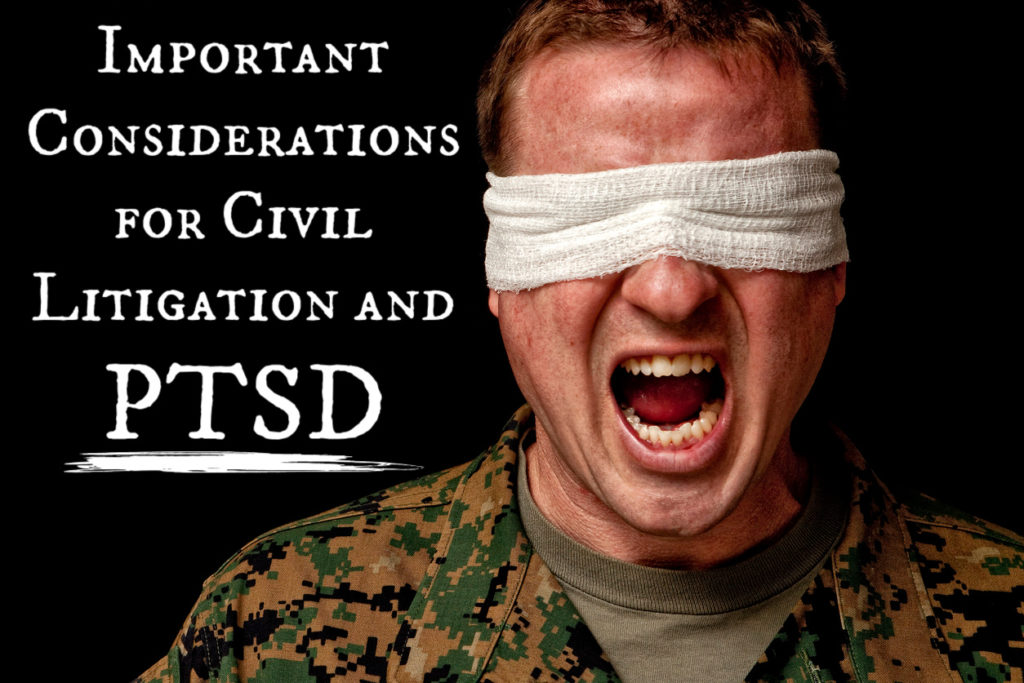 An ever­ increasing number of plaintiffs are claiming post-­traumatic stress disorder. Why such a sudden, marked increase in litigation of this form?

Post­-traumatic stress disorder (PTSD) was first described in the sixth century B.C. The symptoms associated with the illness have not changed, though the name of the condition itself has, naturally, changed. In World War I the disorder was labeled “shell shock,” linking the condition to the close lines between battling armies and the continuous firing of munitions. In World War II, the condition came to be called “combat neurosis.” The term “post­-traumatic stress disorder” entered the psychiatric nomenclature with the 1980
publication of the Diagnostic and Statistical Manual of Mental Disorders, 3rd Edition.

The Vietnam conflict heightened the lay public’s awareness of this condition, through frequent articles in the press, movies, and books depicting the invisible wounds caused by combat. Symptoms of the disorder include rapid hyperarousal which frequently leads to aggressive acts. These behavioral changes often lead to the loss of family and employment. In addition, associated alcohol and/or drug abuse as self ­medication of the
symptoms is frequent. Finally, in severe and usually untreated cases, suicide can occur.

The Iraq and Afghanistan wars have once again brought these combat ­related symptoms to the fore, and nowadays there is more awareness of issues surrounding civilian PTSD. According to studies in civilian populations,accidents causing significant injuries, medical malpractice disability, or discrimination and the associated harassment are often
root causes of the disorder. Rape is the incident most predictive of PTSD.

This increased awareness of PTSD is but one reason for the increase in lawsuits involving the disorder. Additionally, according to studies, those who claim to have PTSD win markedly higher legal settlements. Both of these factors incentivize some individuals to simply learn the symptoms and behaviors associated with PTSD, and act them out—especially when there will likely be a sympathetic group of jurors. Lawyers are increasingly aware of such fraudulent claims, and they now place greater emphasis on the full constellation of symptoms that characterize PTSD.

The newest criteria for diagnosis of PTSD include a severely traumatic event, as well as having flashbacks, dreams, and frequent sleep disturbance related to the event. Patients will also often withdraw from environmental stimuli that remind them of the traumatic event.

In all sufferers of PTSD, there is a marked decrease in functional level. The success of civil litigation involving PTSD often depends on the attitudes of jurors and judges toward this psychiatric disorder. Meanwhile, as the amounts awarded to sufferers of PTSD continue to rise, less­ than­ honest lawyers have taken to coaching clients in the art of passing as psychologically traumatized.

Disagreement between psychiatric expert witnesses on the defense and plaintiff sides is common. The witness’ credentials and experience in working with post­-traumatic stress disorder—in both military and civilian populations—frequently determines whether the defense or plaintiff is successful.

Lawyers should always carry out thorough background checks to verify a particular psychiatrist’s professional experiences and background in litigation. Deserving clients will be most appreciative.

Dr. Burton Singerman is a nationally respected psychiatrist who is presently accepting work as an expert witness for both plaintiffs and defendants.

At Trust Expert Resources we pride ourselves with providing the right expert for your case and making the process as easy as possible.
Contact Us
(412) 433-0200info@trustexpertresources.com